Volar ~ To Fly ~ WP PHOTO CHALLENGE (On the Move)

Wet Season is a time of transition in the campo.  We have various bug hatchings, toads and frogs beginning hopping out of nowhere and the birds are trying to find Wet Season homes in which to nest.

This week’s photo challenge asks participants to show “on the move”.  I’ve chosen to focus on some of our birds moving around in the campo.

*Thanks go to SU who is practicing his photography skills and took several of these.

We’ve been watching what we’ve identified as a Savannah Hawk for several days.  SU went out in the campo underneath the tree it likes to perch on and captured these images as it got ready to fly away.

We often see Brown Pelicans at the beach.  This day they were on the rocks and then suddenly all took flight.

This day two flocks intersected.  To the left of the photo some from the second flock are turning around to join the first flock.

Panama Flycatchers, this one is alighting on the Almendra Tree… 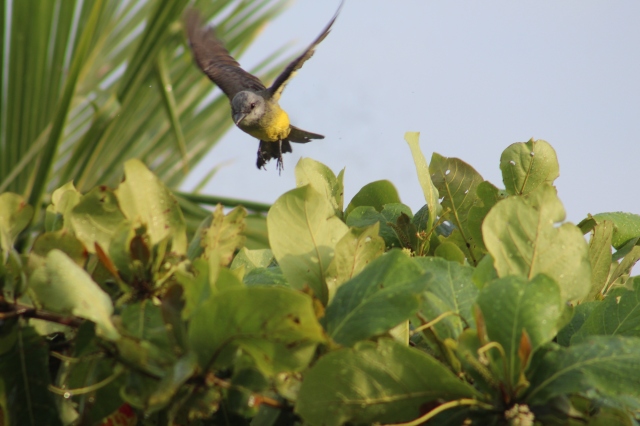 and this one is flying from the Almendra to the Foxtail Palm. 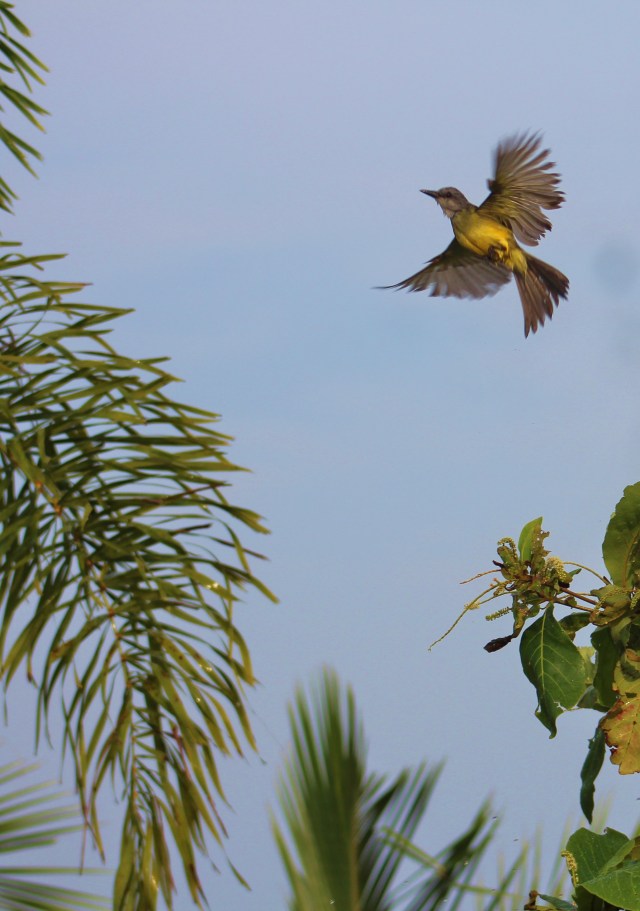 A Blue Tanager landing on the Almendra Tree.

A Palm Tanager landing on what else, a palm, during bath time!

Mango season brings back large flocks of these Brown-throated Parakeets that fly across the back campo looking for more trees to raid. 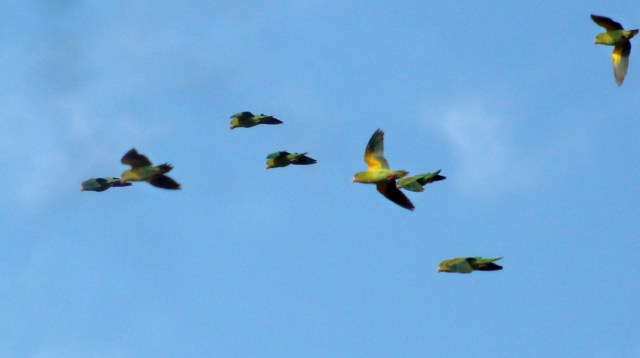 And finally, one half of our mated pair of White-tailed Kites looking for its supper in the campo.

I'd love to hear from you! Cancel reply

Some stories just want to be told: healing and wholeness in everyday life

A dog and cat in clothing. Puns. Travel. Bacon. Not necessarily in that order.

Photography, fiction, humor, opinions, and whatever else I feel like posting

Spreading the dirt, which I live close to

Insanity at its best!

The Art and Craft of Blogging

The Thoughts And Travels Of A Geezer On A Harley ……………………………………... Looking at the World Through Teenage Eyes, But With The Cunning, Guile and Wisdom That Comes With Age!

My little corner of Panama

Blog about our adventures as world travelers and expats living in Colombia.

No Particular Place To Go

We're retired US expats with a yen for new horizons traveling since 2012 and currently based in Portugal.

Travels Inward and Out

To Turkey & back; adventures in life, romance, heartbreak & seeing the funny

The Beauty Along the Road

Discovering Beauty in the small details of our lives

Living It Up in Ecuador

This WordPress.com site is about our life and experiences after retiring in San Clemente Ecuador

Meet You In The Morning

I love going new places, sharing, and encouraging others to travel!

Becky says things about things and other things

Elderly Curmudgeon in a Van

And everyone says, "You're Moving Again??"

This blog is our way of taking you all with us on our awesome adventure! Come on! Let's go!

in the Dominican Republic

Kris's blog, about retirement in Panama, and other various adventures